Home fantasy Vikings The Saga of Great Ragnar Lothbrok
Facebook
Twitter
Pinterest
WhatsApp
Vikings the saga of Viking Ragnar Lothbrok is a historical action drama adventure series and example of astounding production work. Vikings are the best drama TV-series on the history of Television and running debate among viewers that Vikings is the best drama series than Game of Thrones. Vikings series is written and created by Michael Hirst for History Channel. The series inspired Ragnar Lothbrok, a fearless warrior and a farmer one of best known legendary Norse heroes who rise to fame by successful raids into England and eventually becomes a King, with the support of his family and fellow warriors.
This series is a great combination of music, the depiction of characters, projecting strength of medieval life and exploration of cinematography, breathtaking action, outrageous war scenes that will blow your mind.
The storyline of Vikings: The series about a Viking Ragnar Lothbrok (Travis Fimmel) and his families known as Viking Brothers, Sons and other families from Viking Tribes. With the help of fellow members, he rises to become Scandinavian King. Ragnar follows the Norse traditions of devotion to the gods, and he was a direct descendant of Odin.
If you’re a fan of power, war fight and especially things related to God, Odin(The god of wisdom, poetry, death, divination, and magic.) then this historical fantasy adventure series is for you.
Vikings characters very popular, whether it is the beard of Ragnar Lothbrok, the tattoo of Vikings the costume of Vikings characters which is inspired by the medieval age, the sword of Vikings king and outrageous war scenes which definitely arouse to watch this historical drama series.
The Vikings series is released on History TV channel with consisting of six seasons and 79 episodes so far.
IMDB Rating of Vikings: 8.6 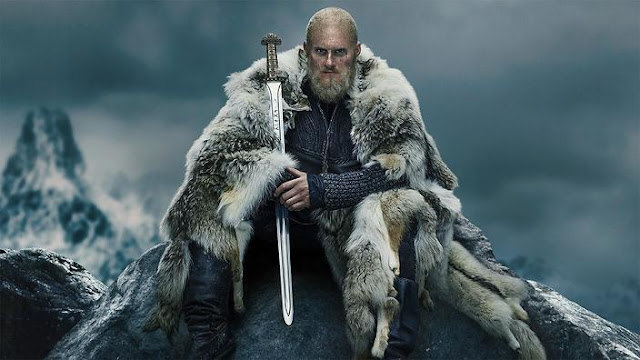