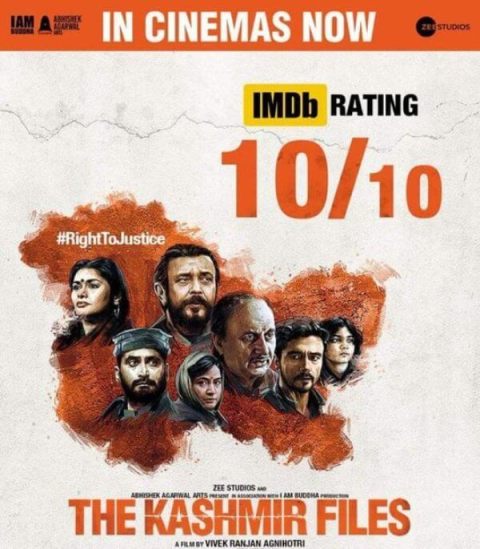 Since the release of The Kashmir Files movie breaks record and reach out mass and get praise from locals to PM Modi who appreciate and give best wishes to the team of The Kashmir Files director Vivek Agnihotri, Pallavi Joshi, Anupam Kher’s movie which shows the exodus of Kashmiri Pandits, The movie trends tops on social media platform twitter from last three days.

The movie gets positive reviews from critics as well as fans, as a result, it gets an IMDB rating of 10.0, which is a record for the first time for any Indian movie.

On 9 Day The Kashmir Files Box Office Collection earns Rs 24.80 crore, taking the total box office collection to Rs 141.25 crore. The Kashmir Files give beat Akshay Kumar’s Bachchan Paandey movie unable to grab the viewer’s attention at the box office which is released this Holi, and The Kashmir Files which was released on March 11, is based on the genocide of Kashmiri Hindus during the Kashmir insurgency in 1990 became blockbuster and estimated to touch Rs.300 crore mark in coming days.

Vivek Agnihotri’s The Kashmir Files, earned Rs 141.25 crore in its ninth day of release. The film is now inching closer to the Rs 150-crore mark.

The Kashmir Files earned Rs 18 crore at the worldwide box office on Day 5. And on Day 6, it showed tremendous growth. The film reportedly clocked in Rs 19.30 crore on its sixth day, taking the total box office collection to Rs 79.50 crore. We are sure it would enter the Rs 100-crore club soon.

The Kashmir Files saw a huge jump at the box office on its third day. The film has collected a total of ₹27.15 crores in three days.

The Kashmir Files became super-hit within three days after its release and box office experts believe that it The Kashmir Files Box Office Collection around Rs.100 crore in the coming days, as mouth publicity works slowly and the audience reaching theatres to watch the film.