Home fantasy Stranger Things The Best Fantasy SCI-FI Web Series
Facebook
Twitter
Pinterest
WhatsApp
Stranger Things is a fantasy drama Web Television series created by the Duffer Brothers and released on Netflix in July 2016. The series is based o 80s classic nostalgia set in 1983 where a young boy suddenly disappears in the night, After that his best friends, and his family, a policeman searching day and night for him. When the searching of the boy is going on series unknown events come towards them, and the involvement of high government officers’ experiments, supernatural activity and a very strange girl with a special gift of power all are met to find the lost boy.
The series is so popular that the creators released four seasons of Stranger Things so far. The Duffer brothers developed the whole series with a mix of fantasy supernatural elements, suspense, children humour, horror and including of science fiction theory. All four series of Stranger things are inspired by the Hollywood director Steven Spielberg, John Carpenter, and Stephen King films.
Stranger Things is a critically acclaimed series and receive warm response across the world and also received many awards and nomination. So, we’ve got covered this series in the best fantasy TV show post.
The storyline of Stranger Things Season 1: In the 1980s Stranger Things is set in the imaginary rural town of Hawkins, Indiana. When Will Byers (Noah Schnapp) is capture by some supernatural creature from the Upside Down. His mother, Joyce Byers (Winona Ryder), and the town’s police chief, Jim Hopper (David Harbour), search for him. Somewhere, a young girl called Eleven (Millie Bobby Brown) escapes from the laboratory and help Will’s friends, Mike, Dustin, and Lucas, to find Will. Nearby secretly Government performs scientific research and experiments into the paranormal and supernatural.
The storyline of Stranger Things Season 2: The second season is set a year later, starting in October 1984. Will have been rescued, he infected at that time of kidnap by the supernatural things but no one knows the details of the events.
The storyline of Stranger Things Season 3: The third season is set several months later. The new Starcourt Mall has become the center of attention for Hawkins’ residents. A secret Soviet laboratory under Starcourt seeks to open the gateway to the Upside Down, allowing the entities from the Upside Down to possess people in Hawkins and creating a new horror to deal with.
Creators of Stranger Things: Matt Duffer and Ross Duffer, known professionally as the Duffer Brothers are the creators of Stranger Things.
Stranger Things IMDB Rating: 8.8 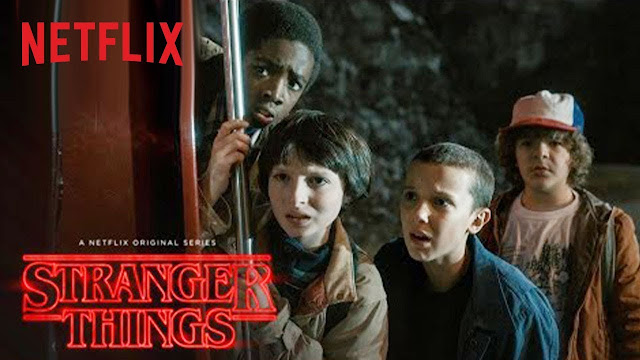