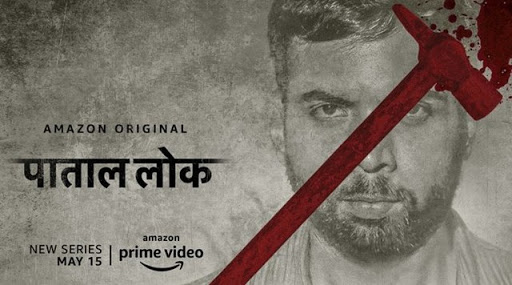 Recently the release of Indian TV series Paatal Lok streaming on Amazon Prime, create vows amongst the viewers with a gripping story and superb acting take you to the long journey of a mysterious crime drama show. There is no doubt that Pataal Lok – a thrilling story of unfiltered India. Creator Sudeep Sharma bring suspense and mystery in such a dramatic fashion that holds you to watch the entire show. Paatal Lok revolving around the intricacies of politics, media, and police have never been explored before in the Indian entertainment industry. Though an attempt can be seen to cash in on resonating it with mythology, the series could stand completely independent of the minor mythological resemblance.
The Storyline of Paatal Lok Season 1 – Inspector Hathi Ram Chaudhary (Jaideep Ahlawat) is an honest  Delhi cop who has nothing to look forward to in his less than ordinary career and one day he gets a high profile case a case too big and important for his designation. A case is about when four suspects are nabbed in the assassination attempt of a journalist. The pursuit of it leads him to ‘Paatal Lok’, and to shocking discoveries in the past of the four suspects.
Creator of Paatal Lok: Sudip Sharma
First season of this crime drama series Paatal Lok consists of nine episodes.
IMDB Rating of Paatal Lok – 8.9
Network: Amazon Prime Video
Paatal Lok Cast and Characters:
Neeraj Kabi as Sanjeev Mehra
Gul Panag as Renu Chaudhary
Jaideep Ahlawat as Hathiram Chaudhary
Mairembam Ronaldo Singh as Mary Lyngdoh
Abhishek Banerjee as Vishal Tyagi “Hathoda”
Swastika Mukherjee as Dolly Mehra
Ishwak Singh as Imran Ansari
Sandeep Mahajan as Dahiya
Jagjeet Sandhu as Tope Singh “Chaaku”
Asif Khan as Kabir M
Niharika Lyra Dutt as Sara Matthews
Bodhisattva Sharma as Siddharth Chaudhary
Anindita Bose as Chanda Mukherjee
Vipin Sharma as DCP Bhagat
Asif Basra as Jai Malik
Manish Chaudhary as Vikram Kapoor
Akash Khurana as Singh Saab