Netflix’s new Korean Zombie drama All of Us Are Dead series was released on the popular OTT platform on Netflix, Not like any regular zombie movie this high intense series is worth watching yeah little bit longer but it has gone worth it the story takes time to build after the story takes speed and work like a slow poison like Squid Games Korean average one hour each of twelve-episode. The plot of Korean drama series based on a Hyosan High School becomes ground zero for a zombie virus outbreak. Trapped students must fight their way out or turn into one of the rabid infected.

If you’re a teen you love the chemistry between students especially park solomon character left alone in the school-room and try to protect from fellow zombie students who get infected by bitting each one. There is plenty of emotional scenes and suspense build-up in each scene which makes your time worth it to watch the entire All of Us Are Dead season 1.

The Netflix show is based on the Naver webtoon Now at Our School by Joo Dong-geun, which was published between 2009 and 2011. The show was directed by Lee Jae-kyoo and Kim Nam-su. 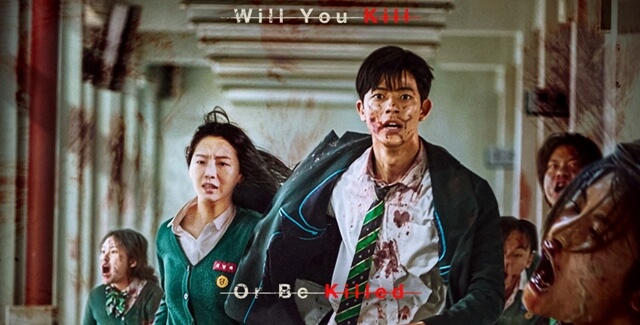 If you are a fan of Zombie movies then this series gives you a punch with a lot of action, blood bath scenes with a strong screenplay with many talented supporting actors who make this series real.

The series is a really more violent scene but it’s really enjoyable. The acting was perfect. The screenplay is amazing.

The show got released on Netflix on January 28, 2022, and has a total of 12 episodes. All of Us Are Dead is directed by Lee JQ and Kim Nam-su. Chun Sung-il writes all 12 episodes of the first season.

Cast & Character of All of Us are Dead: