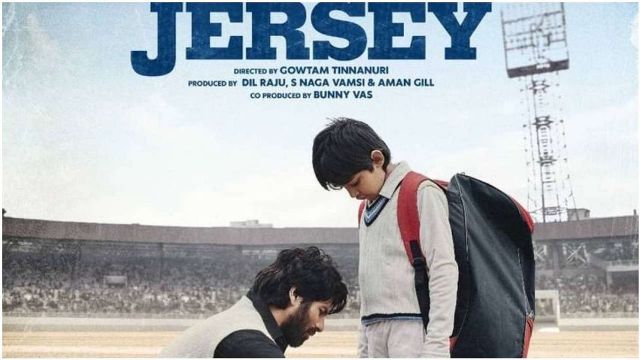 Cinemabolega Rating – 3.5 Stars out of 5

Jersey Movie Review – Shahid Kapoor’s much-awaited movie Jersey released this Friday at Box Office gets average remarks from the critics as well as fans, Jersey is the remake of the Telugu movie ‘Jersey’ starring Nani in the lead role. The Jersey movie is delayed many times due to Covid-19 but finally, release this weekend and gets straight competition with all-time blockbuster KGF Chapter 2, Rocking Star Yash movie is a storm in the box office, and if Jersey wants to survive this has to be given good performance at BO.

Jersey’s story is all about a passionate cricketer who quits cricket for sake of love initially but decides to revive his career at the age of 36 for his son’s dream and to eventually prove his ability. Shahid Kapoor as Arjun Talwar, whose acting is the soul of the film and Shahid is a brilliant actor who plays his role in a very serious manner and grabs the eyeball of fans. Similarly, Mrunal Thakur as Vidya Talwar, Arjun’s wife performance is quite brilliant and at one point Mural successfully plays the love life of Arjun and one and only antagonist from the movie starting you love the character and slowly you hate him, Pankaj Kapur as Madhav Sharma, Arjun’s coach is done a good job.

But the story and everything is the same as the original Jersey except Shahid’s performance many viewers already watch Nani’s Jersey on Youtube so the there is nothing new for the fans, But if the Shahid movie is successfully established a connection with fans then it will give tremendous result in form of BO-Collection.

National award winner Gowtam Tinnanuri who directed the original Jersey movie, as well as the remake, failed to differentiate the remake from the original as it looks like a copy that brings some changes in the plot or gives some tricky puzzles to the movie will definitely succeed.

The BGM and music of Jersey are soothing and relaxing and Sachet Tandon’s song ‘Maiyya Mainu’, ‘Mehram’, and ‘Baliye Re’ is very good.

So, Jersey is a good movie and one time watch, if you do not watch the original movie to date then go for Shahid’s Jersey.