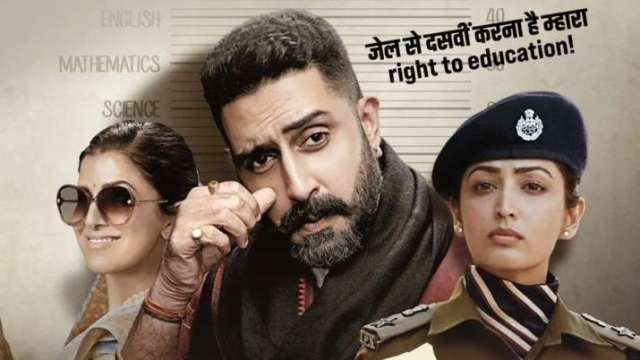 Dasvi review: This weekend two major entertaining flicks Dasvi and Gullak Web series streaming on the OTT platform Netflix and SonyLive. Dasvi stars Abhishek Bachchan, Yami Gautam, and Nimrat Kaur in the lead role. Dasvi is a light comedy social message film that tries to convey a social message in a very casual way and Abhishek Bachchan plays the role of Ganga Ram Chaudhary as a CM who is uneducated and later he realizes to clear his class 10th exam while in prison.

Abhishek Bachchan acting as a Ganga Ram is exceptional and his personality equally matches with character with the Haryani dialect suits best and USP of the movie or say a surprising element is Abhishek’s acting. Parallelly Yami Gautam as IPS Officer Jyoti Deswal controls and guides the powerful politician Abhishek Bachchan in jail and motivates them to clear the 10th (Dasvi) exam, Yami Gautam’s acting improves day by day stating from Vicky Donar to A Thursday and now Dasvi actress versatile performance really work as the backbone of Dasvi, Similarly, Nimrat Kaur who is the wife of Abhishek Bachchan as Chief Minister Bimla Devi performance is excellent the way she shows her shyness and simplicity latter covert into tricky who behave like a true politician.

Director Tushar Jalota’s work and honest commitment to bringing nice comedy-drama in front of an audience but without a compelling story all the hard work done by teams and actors are wasted, the idea was so good and the cast was excellent but without an interesting story and dialogues, it loses his hold and where the fans get bored. But the movie is watchable and enjoyable and it must watch with the family which imparts a social message and covey the importance of education and important for everyone whether you’re rich or powerful.