Home fantasy Best Fantasy TV Shows of All Time
Facebook
Twitter
Pinterest
WhatsApp
Here are the top best fantasy TV shows of all time, Fantasy TV shows are one most popular trends in the history of Television which is so famous and get an overwhelming response from the audience. Some of the famous OTT(Over the Top Media) platforms like Netflix, Amazon Prime, HBO, Vootm Hotstar, ZEE5, ALT Balaji who gain millions of subscribers with quality content.
Fantasy is a genre of speculative fiction set in a fictional universe, often inspired by real-world myth and folklore. Its roots are in oral traditions, which then became fantasy literature and drama. Fantasy movies and TV shows or a Web Series are very popular nowadays and some most watchable genre of all time. Fantasy TV shows started his journey from along ago with movies from the Harry Potter movie series, and Lords of the Rings series which connect audiences from every level from children to adults and to an older age. Following the old traditional concept of movies making later adapt in the form of TV shows. When HBO released fantasy TV show Game of Thrones first season with eight episodes no one expect that this fantasy this drama show create history in entertainment, Game of Thrones is an American fantasy drama television series created by David Benioff and D. B. Weiss for HBO. It is an adaptation of A Song of Ice and Fire, George R. R. Martin’s series of fantasy novels, The series premiered on HBO in the United States on April 17, 2011, and concluded on May 19, 2019, with 73 episodes broadcast over eight seasons. Game of Thrones is one most popular fantasy dramas of all time.

Here are the 10 Best Fantasy TV shows of All Time

1. Game of Thrones: All we know why the Game of Thrones hold the first position in this list with eight season and seventy-three episode this fantasy drama series breaks so many records in term of viewership, subscriber addition. Game of Thrones story is all about the nine noble families fight for control over the lands of Westeros, while an ancient enemy returns after being dormant for millennia.
David Benioff, D.B. Weiss come with actors like Peter Dinklage, Lena Headey, Emilia Clarke, Kit Harington, Sophie Turner, Maisie Williams, Nikolaj Coster, Iain Glen, John Bradley play a pivotal role in this fantasy drama shows.
Network: HBO
IMDB Rating: 9.3
Game of Thrones based on the best-selling book series “A Song of Ice and Fire” by George R.R. Martin.
2. Stranger Things: Stranger Things is the most popular and adventure fantasy drama series, this sci-fi horror-fantasy drama having nail-biting suspense in each scene and kids innocence timing of actors will make you love to watch this series. Strangers Things is meant for all children, adults and for older age. Stranger Things having three successful seasons with 33 episodes all available on Netflix subscription, Stranger Things revolves around a young boy who disappears, his mother, a police chief, and his friends must confront terrifying supernatural forces in order to get him back.
The first season of the American fantasy science fiction-horror web television series Stranger Things premiered worldwide on July 15, 2016. Stranger Things was created by The Duffer Brothers and lead role by actors Winona Ryder, David Harbour, Finn Wolfhard, Millie Bobby Brown, Gaten Matarazzo, Caleb McLaughlin, Natalia Dyer, Charlie Heaton, Cara Buono, Matthew Modine.
Network: Netflix
IMDB Rating: 8.8
3. The Witcher: The Witcher is a fantasy action drama web series directed by Lauren Schmidt Hissrich for Netflix. It is based on the book series of the same name by Polish writer Andrzej Sapkowski. The Witcher follows the story of Geralt of Rivia, a solitary monster hunter, who struggles to find his place in a world where people often prove more wicked than monsters and beasts. But when the time comes he met with a powerful sorceress and a young princess with a special gift.  Henry Cavill, Freya Allan, Anya Chalotra played a lead role in this fantasy adventure drama.

The first season, consisting of eight episodes, was released on Netflix in its entirety on December 20, 2019. It is based on The Last Wish and Sword of Destiny, which are collections of short stories that precede the main Witcher saga. Netflix announced a second eight-episode season, to be released in 2021.

4. Lucifer: Lucifer is an American television series developed by Tom Kapinos that premiered on Fox on January 25, 2016. It is based on the DC Comics character created by Neil Gaiman, Sam Kieth, and Mike Dringenberg taken from the comic book series The Sandman. Lucifer’s story about Lucifer Morningstar one day has decided he’s had enough of being the dutiful servant in Hell and decides to spend some time on Earth to better understand humanity the story starts. This fantasy adventure drama series having four successful seasons with 67 episodes all season’s episodes available on Netflix.

5. Outlander: Outlander is a fantasy historical drama television series based on the novel series of the same name by Diana Gabaldon. Developed by Ronald D. Moore, the show premiered on August 9, 2014, on Starz. Outlander’s story revolves around the Caitriona Balfe as Claire Randall, a married former World War II nurse who in 1946 finds herself transported back to Scotland in 1743. There she encounters the dashing Highland warrior Jamie Fraser (Sam Heughan) and becomes embroiled in the Jacobite risings.

Outlander having five seasons and 62 episodes.

6. The Originals: The Originals is fantasy–based American drama television series, that began airing on The CW Network station, October 3, 2013. The Originals story about a family of power-hungry thousand-year-old vampires look to take back the city that they built and dominate all those who have done them wrong. The series has five seasons and 92 episodes, the series is directed by Julie Plec and many actors like Joseph Morganm, Daniel Gillies, Claire Holt, Phoebe Tonkin, Charles Michael Davis, Daniella Pineda, Leah Pipes, Danielle Campbell, Yusuf Gatewood, Riley Voelkel, Danielle Rose Russell, Steven Krueger played a vital role in this series.
Network: The CW Television Network
IMDB Rating: 8.2

7. Vikings: Vikings is fantasy-based action, adventure drama series created by Michael Hirst, The Vikings TV Shows are released on History channel. The fantasy historical drama series tells the saga of Ragnar’s band of Viking brothers and his family as he rises to become King of the Viking tribes. As well as being a fearless warrior, Ragnar embodies the Norse traditions of devotion to the gods: legend has it that he was a direct descendant of Odin, the god of war and warriors.

8. The Shannara Chronicles: The Shannara Chronicles is a fantasy-based adventure series directed by Alfred Gough, Miles Millar and stars Austin Butler, Ivana Baquero, Manu Bennett in the lead role. The story is all about an Elvish tree, known as the Ellcrys, is dying. The bad news is that the tree has been the only piece of magic that protects the Four Lands from the Demon World. Amberle Elessedil is the only one who can save the tree. But she has to unlock magic that the Elves haven’t used in thousands of years. With the help of Wil Ohmsford, she travels to find the lost magic. But it won’t be an easy task. 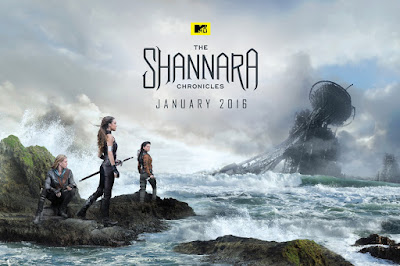