Home fantasy Best Fantasy Movies of All Time
Facebook
Twitter
Pinterest
WhatsApp
When Harry Potter’s first movie is released no one has any idea that this movie is all about but after it creates history and people dying to watch this movie and standing in a long queue to grab Harry Potter books. Also, The Lord of the Rings series makes you speechless with long icy mountain, magical worlds, magicians, big dragons and ghost army all feel so dreamy that the audience is forget and engage in the movie.  We bring you a list of best fantasy movies ever made and which is quite famous and people love to watch in theatres and rollercoaster in there dreams of magic, fancy land, funny and darkest villain.
Here the list of best fantasy movies lists with directors, IMDB rating, plot synopsis.
1. The Lord of the Rings Series: The Lord of the Rings is a film series of three fantasy adventure movie directed by Peter Jackson, based on the novel written by J. R. R. Tolkien.
All the three films are epic fantasy which popular in the mass audiences
the first movie of series is The Fellowship of the Ring (2001), the second one is The Two Towers (2002) and the third one is The Return of the King (2003). The films feature an ensemble cast including Elijah Wood, Ian McKellen, Liv Tyler, Viggo Mortensen, Sean Astin, Cate Blanchett, John Rhys-Davies, Christopher Lee, Billy Boyd, Dominic Monaghan, Orlando Bloom, Hugo Weaving, Andy Serkis, and Sean Bean.
The Lord of the Rings first Movie – The Fellowship of the Ring (2001)
IMDB Rating: 8.8
The storyline of The Fellowship of the Ring: An golden Ring thought lost for centuries has been found, by a Hobbit named Bilbo Baggins then he give ring to his nephew named Frodo. When a famous wizard named Gandalf discovers the Ring and surprise that the ring actually belongs to Dark Lord Sauron, Frodo with his friend to take responsibility to take the ring in the Cracks of Doom in order to destroy it.
Frodo and his friend Sam are joined by fellow hobbits Merry and Pippin,  along with Gandalf, Legolas the elf, Gimli the Dwarf, Aragorn, Boromir. Sam follows Frodo, accompanying him to keep his promise to Gandalf to protect Frodo, while Aragorn, Legolas, and Gimli go to rescue Merry and Pippin after the journey of Frodo begins by crossing many mountains, forests, with many ups ad down in his adventure trip.
The Lord of the Rings Second movie: The Two Towers
IMDB Rating: 8.7
The Storyline of The Two Towers (2002): Frodo Baggins and his friend Sam find themselves lost in the Emyn Muil near Mordor and take help by Gollum, the former owner of the One Ring. After capturing him, a sympathetic Frodo decides to use Gollum as a guide to Mordor, despite Sam’s objections. Whereas Aragorn, the Elf archer Legolas, and Gimli the Dwarf encounter the beset Rohan kingdom, whose King Theoden has fallen under wizard Saruman’s deadly spell.
The Two Towers in The Lord of the Ring Trilogy is widely regarded as one of the greatest and most influential fantasy films ever made. The film received numerous awards at the 75th Academy Awards, it was nominated for six awards, and winning two: Best Sound Editing and Best Visual Effects.
The Lord of the Rings Third Movie: The Return of the King (2003)
IMDB Rating: 8.9
The Storyline of  The Lord of the Rings: The Return of the King (2003): If you love the action then the last film of series that for massive war for middle earth, and the last confrontation between the forces of good and evil fighting for control of the future of Middle-earth. Frodo and Sam reach Mordor in their quest to destroy the One precious Ring, while Gandalf and Aragorn lead the forces of good against Sauron’s evil army at the stone city of Minas Tirith. 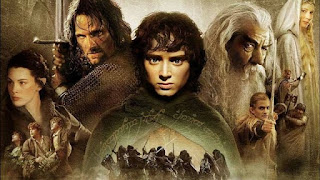 2. Midnight in Paris: Midnight in Paris is a fantasy comedy movie directed by Woody Allen, The Story of Midnight in Paris revolves around a nostalgiac screenwriter in Paris, the film follows Gil Pender (Owen Wilson), a screenwriter, who is forced to confront the limitation of his relationship with his fiancée (Rachel McAdams) and they’re unlike life goals, which become increasingly exaggerated as he travels back in time each night at midnight.

Harry Potter series film has seven films and the last one is in two parts:

IMDB Rating of Harry Potter and the Deathly Hallows part-2: 8.1

The Storyline of Pan’s Labyrinth: The dark fantasy movie when, a ten year named Ofelia girl, fascinated with fairy-tales, is sent along with her pregnant mother to live with her new stepfather, a ruthless captain of the Spanish army. ten-year-old Ofelia travels with her pregnant but sickly mother Carmen to meet Captain Vidal, her new stepfather. Vidal, the son of a famed commander who died in Morocco, believes strongly in Falangism and has been assigned to hunt down republican rebels. Suddenly Ofelia met with a fairy and leads her through the labyrinth. There, she meets a faun, who believes she is the reincarnation of Princess Moanna. He gives her a book and tells her she will find in it three tasks to complete in order for her to acquire immortality and return to her kingdom.

5. About Time: About Time is a British romantic fantasy-comedy movie,  if you want to travel back in time and undo the task that you did wrong in the past then this movie is definitely for you. The story was written and directed by the Richard Curtis and cast  Domhnall Gleeson, Rachel McAdams, Bill Nighy in the lead role.

IMDB Rating of About Time: 7.8

The Storyline of About Time: At the age of 21, Tim Lake (Domhnall Gleeson) father Bill Nighly tells him a secret that he can travel in time, So he decides to make his world a better place…by getting a girlfriend. Sadly, that turns out not to be as easy as you might think. Moving from the Cornwall coast to London to train as a lawyer, Tim finally meets the beautiful Mary (Rachel McAdams). They fall in love, then an unfortunate time-travel incident means he’s never met her at all. So they meet for the first time again-and again-but finally, after a lot of cunning time-traveling, he wins her heart. In order to time travel, they must be in a dark space, clench their fists and visualize the memory they wish to travel back to. James discourages his son from using his gift to acquire money or fame, and Tim decides he will use it to improve his love life.