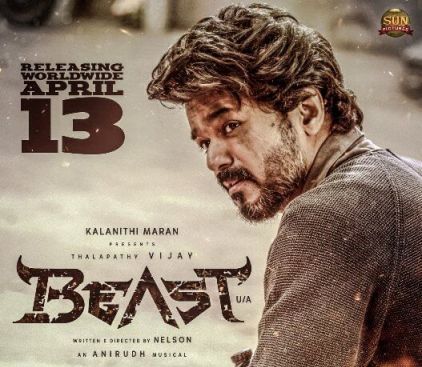 Beast is an upcoming action thriller Tamil movie released date announced and Thalapathy Vijay’s fans who eagerly waiting for the movie is hit theatres on 13th April, This mega-budget movie directed by famous director Nelson who earlier team-up with Actor Vijay and association with Sun Pictures as producers. Before the release of Beast, the soundtrack is trending on the internet “Arabic Kuthu” “Jolly O Gymkhana” both songs are creating buzz among the fans. Music director Anirudh Ravichander has given their so far best composition till date both the songs hit more than 250 million hits ” Arabic Kuthu and Jolly O Gymkhana “.

The Cast of Beast Movie:

What was the Budget of Beast Movie?

What are the Actor Vijay’s fees for Beast Movie?

Thalapathy Vijay’s fee is around 66% of the film’s budget approx Rs.100 crore.

Who is the villain in Beast?

In Which Language Beast Movie Releasing?

Beast is a Tamil Movie.

Expert believe that Beast movie can get around some Rs.300 crore as fans eagerly waiting for so long time of any Vijay’s movie after Covid-19.