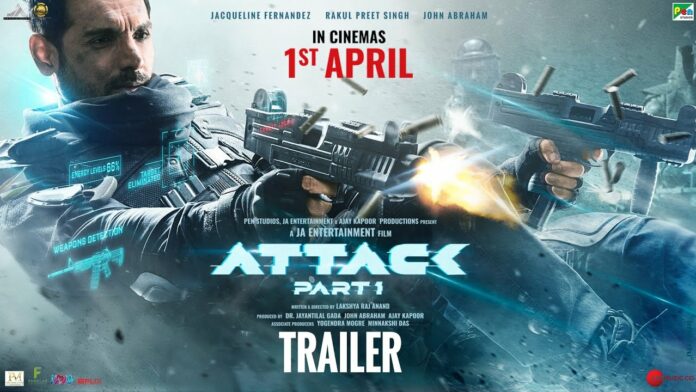 John Abraham starring Attack Movie (2022) trailer released today on the social media platform, Director Lakshya Raj Anand sci-fi action drama movie set to be released on 1st April. Attack is an upcoming Indian Hindi-language cyberpunk body superhero action thriller film movie starring lead John Abraham as Arjun, Jacqueline Fernandez, Rakul Preet Singh, Prakash Raj, Ratna Pathak Shah. India’s first super-soldier movie with full hardcore action and stunts with mind-blowing VFX creates buzz among netizens. Like in the trailer They say: “The two most important days in your life are the day you are born and the day you find out why” So get ready to witness the rise of an army soldier as he realizes his destiny and comes to know why he was born: To be India’s first super-soldier created to combat terrorism and stop the rampant terror attacks.

John Abraham is ready to destroy the enemy with his strong body power, it is not just an ordinary action film, the film has a complex drama with an element of sci-fi and an answer to how India deals with terrorism with a sneak peek into the future of warfare.