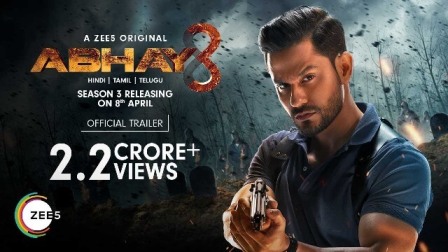 Abhay Season 3 released this Friday on Zee5 Original, this crime thriller web series has already two successful seasons 1 and season 2, as Kunal Khemu in the lead role of Abhay a rustic police officer Abhay Pratap Singh, with the mind of a criminal, who can go to any extent to solve a case. But this time Abhay had to face the most hardcore criminal ever who can create a massive blood bath in the city with lots of suspense and action simultaneously Abhay also had to fulfill the father’s responsibility after his wife died. The versatile actor Vijay Raaz this time gives tough competition to Abhay (Kunal Khemu).

This time Abhay faces a new unknown threat, and Vijay Raaz portrays the leader of a black magic force capable of exploiting anyone in the name of a twisted belief.

Abhay and his team must now crackdown on more than just criminality. Abhay is in a mess of his own life and cannot forget the setbacks he has endured. Abhay 3 has 8 episodes and each episode carries intense suspense to the next episode.

Abhay 3 starts by solving a murder mystery latter many more murders are happening in town, but Abhay and his team crackdown on this case and solve the mystery, and starting from the first episode it set the tone for the remaining episodes. Once you stick from the first episode you watch till the last the series is much more fascinating and has lots of suspense you start thinking about what happens next, Storyteller cleverly reveals the story in one by one episode similarly each actor’s performance and character buildup along with Abhay is mastery by the director which is very clear and intriguing.

Director Ken Ghosh make a strong screenplay and choose every character to match every actor like Kunal Khemu as Abhay, Vijay Raaz as Mrityu, Asha Negi as Sonam, Rahul Dev as Avtar, Tanuj Virwani as Kabir, Divya Agarwal as Harleen, Nidhi Singh as Khushboo, Vidya Malvade as Nidhi performance are excellent, especially Vijay Raaz who character as Mrityu believes in dark magic and convince anyone to die, Vijay Raaz acting is at par and Asha Negi as Sonam who fight with Abhay is done a great job and Nidhi Singh as a police inspector who supports Abhay to solve the case on other hand to doubt Abhay who murder Sonam.